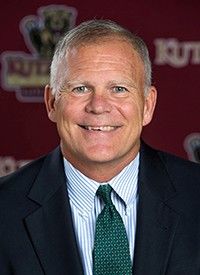 Driscoll has led the Golden Bears to a winning season in 13 of the last 15 seasons, and an appearance in the PSAC Tournament in 14 of the last 15. Kutztown qualified for back-to-back NCAA Tournaments twice in his career (2009-10, 2016-17), the first NCAA bids for the program since its first-ever bid in 1988. KU has appeared in two Atlantic Region Finals and NCAA Sweet 16's, the most recent coming in 2016.

During a 10-year span from 2002-12, Driscoll led the Golden Bears to 10 straight winning seasons and a program record 10-straight PSAC playoff appearances. At the time, it was the longest active streak of any PSAC school.

At the national level, KU has had four all-region players under Driscoll's tenure, highlighted by Stephen Dennis, the 2010 Daktronics Ron Lenz National Player of the Year. Dennis is Kutztown's all-time leading scorer and was a First Team All-American and Atlantic Region Player of the Year in his senior year in 2009-10.

KU set multiple school-records in 2017. KU won its second straight PSAC East title and appeared in its second-straight NCAA Tournament. It went 26-4 for its most successful season under Driscoll's tenure in terms of winning percentage (.867), and marked Driscoll's fifth career 20-win season. KU won a school-record 20 PSAC games and tied the 100-year school-record winning streak of 18 games. KU was featured in the NABC National Poll the entire season, with its highest ranking of fifth - the second-highest ranking in program history.

Driscoll guided KU to its fourth PSAC Eastern Division regular season championship in 2012, the program's fourth title in five years. KU finished 18-9 overall, had a then-school-record 15 PSAC victories, and was the No. 1 seed in the playoffs and hosted a home playoff game against East Stroudsburg.

In the 2009-10 season, Driscoll guided the Golden Bears to a 23-8 record, marking the first time in school history the team had back-to-back 20-win seasons. With a 75-59 win over Gannon on Jan. 2, 2010, Driscoll picked up his 150th career win at the helm of the Golden Bears. The team was ranked in every single national poll and reached a school-best No. 2 on Jan. 19, 2010. The Golden Bears finished runner-up in the PSAC Championship and earned a trip to the NCAA Regionals.

In 2008-09, Driscoll was named the PSAC East Coach of the Year for the second time in his career, led the Golden Bears to the PSAC Championship game and the NCAA Division II Atlantic Region final. With 28 wins, the Golden Bears won more games than any other team in school history. KU also won a school-record four postseason games, two in the PSAC tournament and another two in the NCAA Division II tournament. The two NCAA tournament wins were program firsts. The PSAC East title was the program's first outright since 1987-88. It was the second straight PSAC East crown, as KU earned a share of the title in 2007-08 with Cheyney, finishing 10-2 in the division. Driscoll's 82-76 win over Cheyney at Keystone Hall on Feb. 25, 2008, moved him past Walt Risley for most coaching wins in school history.

KU hosted its third PSAC playoff game in 2008-09 and picked up its first win at home in the playoffs, with a 98-87 win over Mansfield. The win capped a 15-0 season at Keystone Hall, the first team in the modern era to go undefeated at home.

In 2004-05, the team was 15-12 overall, also advancing to the quarterfinals. KU was ranked as high as 17th in the nation. In 2003-04, KU reached the PSAC title game for the first time in 16 years. In 2002-03, Driscoll’s club had a remarkable turnaround, as he earned PSAC East Coach of the Year honors. After winning a combined 11 games in two years, the Golden Bears went 18-10 overall, and 8-4 in the PSAC East. The squad made its first PSAC playoff appearance since 1999, winning the second-most games in school history.

Driscoll came to Kutztown from West Chester, where he served as the top assistant coach from 1987-2000. In his final three seasons there, the Golden Rams won two PSAC East titles, and received two bids to the NCAA Tournament. WCU produced a string of three straight 20-win seasons, and appeared in the PSAC Final Four each of those three years. In addition, Driscoll was a key factor in the academic success of the Golden Ram basketball program, which boasted a 98 percent graduation rate for its players.

Driscoll received a bachelor’s degree in biology from Dickinson College in 1977. While at Dickinson, he participated in varsity football and baseball and still holds most of the career receiving records at the school. He received a master’s degree in education from St. Joseph’s University in 1988.

Driscoll and his wife, Liz, have three children — daughters, Maureen and Kelly, and son, Rick.