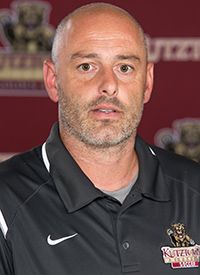 Erik Burstein enters his 12th season at the helm of the Kutztown University women's soccer program in 2018.

Burstein is the winningest coach in program history and has guided the Kutztown women's soccer program to one of the most nationally-recognizable women's soccer programs in the country. KU has appeared in the NSCAA (United Soccer Coaches) National Poll for the past 10 seasons, including the program's first-ever No. 1 ranking in 2017.

Kutztown won its first-ever NCAA Atlantic Region Championship in 2016. KU overcame a two-goal deficit for the first time in school history to defeat West Chester 3-2 on the road to win the regional title. KU defeated Bridgeport in the Elite Eight (1-0) to advance to the Final Four for the first time in school history. KU finished with a 20-5 record, 13-3 in the PSAC, to set school-records for overall wins, regular-season wins (15), PSAC wins, and tied the school-record for shutouts (13) and longest winning streak (nine). KU won three NCAA Tournament games in 2016, its most in a season in school history.

For their efforts, Burstein and his assistant coach Kelly Bushe were named the Atlantic Region Coaching Staff of the Year by the NSCAA.

Burstein became the winningest coach in school history on Oct. 8, 2014, in a 2-0 win vs. Seton Hill University. Six days later on Oct. 14, Burstein won his 100th game at the helm of the Golden Bears. KU set its initial winning streak record in 2014 with its first nine-game winning streak.

Burstein has guided the program's two Atlantic Region and PSAC Offensive Athletes of the Year - Sam Costello in 2014, and Emily Zwiercan in 2017. For his career, Burstein has coached 42 All-PSAC selections, 50 All-Region honorees (31 NSCAA/United Soccer Coaches; 19 Daktronics/D2CCA), a PSAC East Rookie of the Year and the program's six All-Americans.

The KU women’s soccer program has won 10-plus games in 16 straight seasons, including all 11 of Burstein's years at the helm of the Golden Bears. In 2013, Kutztown won its first-ever NCAA Tournament game by defeating West Chester, 2-0, in the first round of the Atlantic Regionals.

On the national stage, Kutztown has qualified for the NCAA Division II Atlantic Region Tournament in seven of the last nine years under Burstein, and has been featured in the NSCAA (United Soccer Coaches) National Top 25 poll for the past 10 years, including 2017.

Before setting the school-record for wins in a season with 16 in 2011, Burstein guided the 2009 Golden Bears to 15 wins, which was the previous record. Notably, 13 of the 15 victories were by shutout, which is a Kutztown record for shutouts in a season.

Burstein came to Kutztown from Bowling Green State University, where he served as an assistant coach during the 2006 season. An accomplished soccer player, he brought 10 years of coaching experience with him to Kutztown.

While with the Bowling Green Falcons, Burstein worked primarily with the defenders and goalkeepers, which produced the team’s best defensive record in the program’s 10-year history in 2006. The team allowed the fewest goals, produced the most shutouts and had the league’s leading goalkeeper in goals-against average.

Prior to BGSU, Burstein was the head coach at Division III Rutgers University-Newark. Over three seasons, he guided the Scarlet Raiders to a 23-29-2 record. His team was 8-10 in 2003, then the school’s record for wins. The next year, Burstein led the squad to the first winning season in program history, finishing 10-7-1. Prior to taking over as head coach, Burstein served the 2002 season as assistant coach at Rutgers-Newark.

Burstein began his coaching career in 1997, when he coached the Greater Akron (OH) Premier and West Akron Soccer Club under-14 boys teams. He was also an assistant coach at Median Highland High School. He has spent time as director of coaching/player development with the Lakehurst-Manchester Soccer Association (2000-02) and on the coaching staff with the New Jersey Olympic Development Program (2002-06).

From 2003-04, Burstein was an assistant coach with the Jersey Shore Boca F.C. of the United Soccer League: Premier Development League.

An accomplished goalkeeper in his own right, Burstein was a two-time all-conference, all-county and all-state first-team selection at his alma mater, Toms River East (N.J.) High School. He was a Mid-Atlantic All-America selection as a senior in 1994.

Burstein has also played professionally, both domestically and internationally. He was a member of the Brooklyn Italians Professional Soccer team in 1991, and then played for the Leyton Orient F.C. (English 3rd Division) from 1994-95. He played for the New Jersey Youth Soccer State Cup Champion Jersey Shore Boca F.C. in 1992 and 1994, and earned a spot on the Olympic Development Program at both the state (New Jersey) and regional (Region I) levels from 1990-94.

Burstein is a 2002 graduate of Richard Stockton College of New Jersey, with a degree in communications. Burstein and his wife, Brigitte, have two sons, Gavin and Travis.