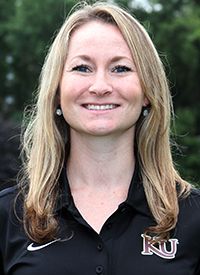 Jackie Stezzi enters her first season as the head women's lacrosse coach at Kutztown University in 2018.

Stezzi spent eight years at Wilmington University, including the last six as head coach from 2012-17. She was named the Central Atlantic Collegiate Conference (CACC) Coach of the Year in her initial season in 2012 after leading her team to the conference semifinals. She coached 22 CACC all-conference selections.

An active advocate for the growth of women's lacrosse, she represented Division II while serving on the Intercollegiate Women's Lacrosse Association's (IWLCA) Board of Directors from 2014-16. In addition, she has served on the RAC committee as well as the IWLCA Division II All-America selection committee.

Stezzi graduated from Council Rock High School, where she was a two-sport standout in lacrosse and field hockey.

A 2009 graduate of Monmouth University, Stezzi was a four-year member of the Hawks lacrosse team. In her four seasons, Stezzi helped lead the squad to three regular season Northeast Conference titles (2005, 2006, 2008), along with two Northeast Conference Tournament Championship (2006, 2007). She also helped guide the Hawks to the first round of the NCAA National Tournament in 2007.

Prior to Wilmington, Stezzi spent one season as a volunteer assistant coach at Monmouth, and also coached at St. James Elementary in Red Bank, N.J. Stezzi has also spent time working at the T3 Summer Clinic and the Nike Lacrosse Camp. She was invited to play for USAAI in the Down Under Cup in Melbourne, Australia. Stezzi was awarded Team MVP in a game against the U-19 Australian National Team. She also traveled with the USAAI club program in 2008 and competed in the Berlin Open and Prague Cup.

She also coaches the Victory Lacrosse Club and previously served as the girls' director for the Rippin' Rope Lacrosse Club.

Stezzi earned dual bachelor's degrees in political science and history from Monmouth, and currently resides in Philadelphia with her husband, Tim.