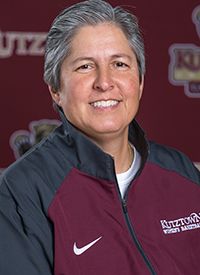 The Golden Bears have reached the postseason seven of the last nine years. On March 1, 2014, Malouf won her 300th career game as her sixth-seeded Golden Bears upset third-seeded Shippensburg on the road in the playoffs, 83-74. She is one of five PSAC coaches to win 300 career games.

In 2009-10, Malouf's Golden Bears went 19-9 overall and 9-5 in the PSAC East and advanced to the PSAC semifinals. KU was the No. 2 seed in the PSAC East quarterfinals, beating Bloomsburg in overtime and falling to Gannon, who was the top-ranked team in Division II, in the 2010 semifinals.

Malouf has had the three winningest seasons in school history. In 1999-2000, the Golden Bears set a school record with 21 victories. During that season, Malouf became Kutztown’s first women’s basketball coach to win 100 career games. In 1995-96, Malouf’s squad won a then-school-record 20 games, including a 9-3 mark in the PSAC East and a share of the regular season division title. The Golden Bears advanced to the NCAA Regional playoffs for the first time in school history.

Prior to Kutztown, Malouf was the assistant women’s basketball coach at Lafayette College for four seasons. The Leopards had winning campaigns three of the four seasons during her tenure. Malouf received her master’s degree in sports management from Purdue University in 1990, where she served as a volunteer basketball assistant.

In addition to her Division I coaching experience, Malouf also played at Division I powerhouse Rutgers University, where she received her bachelor’s degree in sports management. She was a four-year starter under head coach Theresa Grentz, who also was the coach of the 1992 U.S. Olympic women’s basketball team. Malouf helped the Scarlet Knights to the NCAA tournament four straight years, finishing in the Elite Eight in 1986 and 1987 and in the Sweet 16 in 1988. She held the university’s assist record for men and women (718 career, 209 season) until 2001. In 2003, Malouf was inducted into the Rutgers Women’s Basketball Hall of Fame.