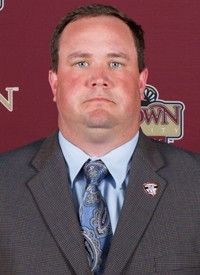 Clements has achieved winning seasons in each of his four seasons at the helm of the Golden Bears, the first KU head coach in program history to open his career with consecutive winning seasons. He holds a 28-16 record (.636) at KU and a 22-8 mark (.733) in the Pennsylvania State Athletic Conference (PSAC). He ranks fifth at KU in career wins, holds the best winning percentage among any coach in program history, and brought KU back into the NCAA Regional Poll in 2017 after a six-year hiatus for the program.

At Kutztown, he led the Golden Bears to the 2016 PSAC East title with a perfect 7-0 divisional record, a first for the program, to earn him the PSAC East and KU Coach of the Year honors. After starting the season 0-3, Kutztown rattled off seven straight wins to play in the PSAC Championship Game for the third time in program history. It was the biggest turnaround in a season in program history.

Clements' players have combined to earn 42 All-PSAC honors, including 20 on the defensive side of the ball. His rushing defense has been the best in the modern era at Kutztown, holding opponents to 86.7 yards/game in 2017. He has posted four shutouts in his KU career, including a school-record 74-0 win over Cheyney in 2014. His defense led the PSAC in red zone defense in 2014 (19th in the nation) and ranked in the top three in the PSAC in total defense and turnover margin. KU ranked fifth in Division II in sacks in 2016 at 3.82 per game. His defense held opponents to 19.5 points per game in 2017, the best mark for the program since 1996, and less than 200 passing yards per game for the first time in 10 years.

Offensively, each of his four seasons rank in the top-seven in KU history in total offense per game, highlighted by a school-record 488.8 per game in 2015. In 2015, Clements' team posted the largest comeback in school-history of 21 points at Indiana (PA). In doing so, he became the only coach in program history to defeat Indiana (PA). KU also posted its first-ever 400-yard rushing game under Clements in 2015, and broke that record again in 2016 with 459 yards at East Stroudsburg.

While at Kutztown, Clements is 21-1 when holding opponents to less than 24 points and 14-2 when limiting teams to less than 100 rushing yards.

He was named the head coach at Kutztown on March 19, 2014, and is the 16th head coach in Kutztown's modern football history.

Clements came to Kutztown after serving as the head coach at Division III Delaware Valley College for eight years. He is the winningest coach in Delaware Valley history with an overall record of 66-24 from 2006-13, including a perfect 10-0 regular season in 2011. He earned four Middle Atlantic Conference (MAC) championships (2008-11) and three NCAA second round appearances (2009-11).

Clements' arrival at Delaware Valley in 2004 as assistant head coach/defensive coordinator was one of the key reasons why the team posted back-to-back 12-1 records. The Aggies captured the MAC championship and advanced to the NCAA Division III quarterfinals each season.

He played at Widener University and anchored the defensive line as the Pioneers won the conference crown and reached the 1994 South Region final of the NCAA Division III playoffs. Clements was a three-year starter and recorded 154 tackles in his career.

Clements then served as a student-assistant in 1995 as Widener successfully defended its conference title and reached the NCAA playoffs. Clements returned to his alma mater two years later as a graduate assistant coach and was elevated to a full-time position in 1998. During that tenure, he coached the defensive line as well as the linebackers and special teams before eventually becoming the defensive coordinator in 2003.

Clements and his wife, Sue, reside in Trappe, Pennsylvania, and have two children: a son, Hayden (13), and a daughter, Amelia (9).