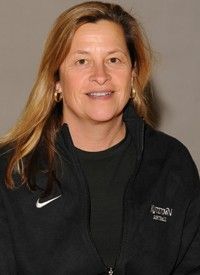 Lawes is currently 1-of-9 active softball coaches in Division II to coach for 30 years. She is the only active and just the second 30-year coach in the PSAC.

Lawes has led the Golden Bears to all 18 of their appearances in the NCAA Division II Tournament. She guided them to three-straight appearances in 1994-96 and then every year from 2000-13. Lawes has also directed KU to 18 PSAC playoff appearances.

On the regional level, Kutztown has won two Atlantic Region titles under Lawes, whose staff was named the 2012 Regional Staff of the Year after winning a school-record 52 games and 22 in the PSAC East. KU appeared at the NCAA National Championships in 2012 and 2013, including an appearance in the national title game in 2013.

In 2013, Kutztown won its first-ever PSAC Championship and its second consecutive Atlantic Region Championship. It carried a 14-game winning streak and a perfect 12-0 mark in the postseason to the national championship game. It was KU's 11th straight NCAA Tournament appearance and the first time KU softball competed in the national title game.

Lawes won her 800th career game on May 1, 2013, in the opening game of the PSAC Championship Tournament. As of the 2013 season, Lawes was the 19th NCAA Division II coach to reach the 800-win mark. Among active coaches, Lawes is one of 11 to have reached the 800-win plateau.

Lawes led the Golden Bears to six consecutive 40-win seasons from 2007-12, and set a program-record with 52 wins and a 33-game winning streak in 2012. The Golden Bears were ranked second in the NFCA top 25 poll, the highest mark in school history, before finishing the season ranked third in the final NFCA poll. KU won both the Atlantic Regional and Atlantic Super Regional. At the NCAA National Championships, Kutztown advanced all the way to the national semifinals, before falling to the eventual national champions. Coach Lawes and her staff were awarded the Atlantic Region Coaching Staff of the Year by the NFCA.

The Golden Bears completed their 2012 season with a 52-7 overall record that included a 19-1 mark in conference action. Kutztown won the PSAC East and also captured the Atlantic Regional title. Lawes was named the 2012 PSAC East Coach of the Year. Lawes also notched her 750th career win on March 17, 2012, in a 7-0 victory over the University of the Sciences.

A graduate of Shippensburg University, Lawes received her bachelor’s degree in communications in 1984 and her master’s degree in counseling/student personnel from Shippensburg in 1987. In October 2001, she was inducted into Shippensburg’s Athletic Hall of Fame for her record-setting accomplishments as a softball and tennis player.