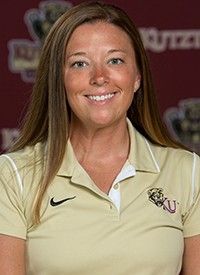 Scheuing, the 2015 Pennsylvania State Athletic Conference (PSAC) Coach of the Year and 2016 KU Women's Coach of the Year, increased Kutztown's win total in her first three years at Kutztown, and is coming off three-straight 10+ win seasons. She holds a 49-41 (.544) overall record at Kutztown.

Scheuing has built a program that continues to contend on the national level. In 2017, Kutztown defeated teams ranked No. 1 and No. 3 in Division II, the first KU win over a No. 1 program since 2009.

In 2015, she led the Golden Bears to their first playoff appearance in six years and Kutztown's first-ever home playoff game. KU won 12 games, was ranked as high as fourth in Division II, and posted an eight-game winning streak, the longest for the program since 2008. KU defeated then-second-ranked West Chester on Oct. 13. It was KU's first win over a second-ranked team in Division II since 2004 and first win over West Chester since WCU joined Division II in 2011.

One of KU's top moments in 2014 was defeating Bloomsburg twice in a season for the first time since 1983, including a double-overtime victory on the road off a penalty stroke goal.

Scheuing has put the Golden Bears in playoff contention in each of her five years. She has coached 19 All-PSAC selections, one PSAC Athlete of the Year and nine All-America honorees.

She also has a strong commitment to excellence in the classroom. At Kutztown, her teams have received the National Field Hockey Coaches Association (NFHCA) National Academic Team Award in each of her first four years, including the top GPA in Division II in 2015 (3.54). Her players have earned 60 nods to the National Academic Squad (3.3 GPA or higher) with 18 Scholars of Distinction (3.9 GPA or higher). Scheuing's Golden Bears set a program-record in 2016 with 20 PSAC Scholar-Athletes.

Scheuing came to Kutztown after three years as the head field hockey coach at Bryn Mawr College. In 2012, she led Bryn Mawr to its best season since 1998, and was named the 2012 Centennial Conference Coach of the Year. The 2012 team scored more goals than the previous six seasons combined. It also posted more wins than the last five seasons combined. Scheuing helped guide two all-conference selections, marking the first time in 13 years that two Bryn Mawr players were named to the all-conference team. At Bryn Mawr, her teams received the National Academic Team Award for three straight years.

As a player, Scheuing was a member of two nationally-ranked field hockey teams at Mansfield University, including an ECAC Championship team in 2001. Named the Most Improved Player at Mansfield in 2002, Scheuing served as team captain of the Mountaineers in 2004, and was named to the Division II All-Star Team the same season.

She received a Bachelor of Science in mass communications with an emphasis in public relations from Mansfield, where she was recognized as a Presidential Scholar Athlete, and also received her Masters of Education in athletic administration at Millersville University.

Scheuing and her husband, Matt, reside in Sinking Spring and have two daughters, Reagan and McKinley. Matt is a U.S. history teacher at Penn Manor High School and the pitching coach for the Franklin & Marshall College baseball team.