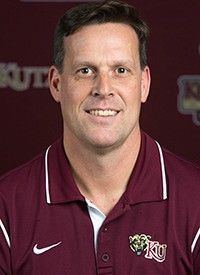 Individually, Hoffman has guided eight individual national qualifiers – five women and three men. His top women's finisher was 1999 All-American Megan Seefeldt, who finished 20th. On the men's side, both of Hoffman's qualifiers came within a three-year span, with his top finisher coming in 2015, when sophomore Steve Maine finished 72nd in his first National Championship in his first of two national runs.

As a team, the women's cross country team has made seven NCAA National Championship appearances under Hoffman (2000, 2001, 2004, 2005, 2006, 2009, 2010). Most recently in 2010, KU finished second at the NCAA Atlantic Regionals to advance to the National Championships for the second consecutive season, where it finished 13th overall - the highest finish in school history.

Academically, the women's cross country team has been named an All-Academic Team by the USTFCCCA (3.0 GPA) in 19 of the last 20 years, including 2017.

While at KU, Hoffman has played a vital role in the school’s most successful era in track and field. During his tenure as an assistant coach, Kutztown’s men’s team won the PSAC Outdoor Track and Field Championship three times (2000, 2001, 2002), finished as runners-up twice (1999, 2005). He became the head coach in 2006. Following 2017, KU's men are in the midst of finishing in the top-five at the Outdoor Championships in six of the last seven years.

On the track, Hoffman’s athletes have set 46 school records during the indoor and outdoor seasons. He has coached 116 PSAC Champions and 278 All-PSAC performers. Additionally, Hoffman was the assistant under 2005 PSAC Women’s Indoor Track and Field co-Coach of the Year Brian Mondschein. Hoffman guided nine athletes to Eastern College Athletic Conference (ECAC) Championship titles (1998-2002).

On the national level, he has had 115 NCAA qualifiers and 16 All-America performers.

In the classroom, Hoffman's women's track & field teams have been named an All-Academic Team by the USTFCCCA (3.0 GPA) for 10 straight years (2008-17). He has had 19 student-athletes combine for 32 individual All-Academic awards as well (3.25 GPA). On the men's side, five student-athletes have combined for seven individual All-Academic awards since Hoffman's tenure as head coach began in 2006. His women's track & field and cross country teams set a program-record in back-to-back years with 27 PSAC Scholar-Athlete's in 2015 and 2016.

Hoffman was an assistant women’s cross country and track and field coach at Clemson (1997-98). He helped guide the Tiger track and field team to second-place finishes at the indoor and outdoor Atlantic Coast Conference (ACC) Championships. In addition, Hoffman coached two junior national qualifiers in the 1000 and 5000, guided his 4x1500 relay team to the seventh-fastest time in the nation, and broke school records in the 4x800 and 4x1500 relays.

Prior to Clemson, Hoffman was an assistant track and field and women’s cross country coach at East Stroudsburg. He was named 1995 ECAC Women’s Cross Country Coach of the Year. He guided the Warriors to two top-three finishes at the ECAC Cross Country Championships, and a consistent top-25 ranking in the country. Achievements by his student-athletes included a four-time All-American in cross country and track and an eight-time national qualifier. Hoffman’s runners captured 18 ECAC and three PSAC titles in track & field, while his track runners set 10 school records and garnered 22 All-PSAC and 27 All-ECAC honors. He also coached the 1996 PSAC and ECAC individual cross country champion, and the top NCAA Division II American miler in 1997.

A 1994 graduate of East Stroudsburg University, Hoffman captained the Warriors’ cross country team as a senior and was a three-time All-ECAC performer in the 3,000 and distance medley relay. He also was an All-PSAC performer in the steeplechase.

Hoffman resides in Breinigsville, Pa., with his wife, Jan, and their sons, Brady (12) and Colby (7).

He holds a bachelor’s degree in psychology and earned his teacher certification in health and physical education from East Stroudsburg in 1994.