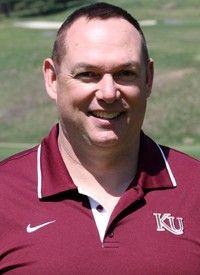 Fisher led his women's golf team to one of the best years in program history in 2014-15. Kutztown tied its best-ever finish at the PSAC Championships with a second place performance, tying its previous-best from 2008 and 2009. KU also crowned its first-ever PSAC Individual Champion, Lauren Smith.

KU has had 10 All-PSAC honorees under Fisher's tutelage.

Fisher took over the reigns of the women's golf team in January 2002, guiding the team through the second half of its sophomore season of existence. The team averaged a little less than 400 strokes per round when he took over in 2002. Following the 2012-13 season, the Golden Bears team average was down to 339 over 18 rounds of golf.

In the 2008-09 season, the Golden Bears finished in second place at three tournaments and third in another. One of the second place finishes was at the PSAC Championships with the team shooting a 637, an improvement of 26 strokes from the 2007-08 tournament, when it placed seventh.

Fisher also serves as head coach of Kutztown’s wrestling program. Over the past 17 years, Fisher has amassed a dual meet record of 187-91-2 (.671). His wrestlers have earned 19 All-America honors and have won four national championships. He served as assistant coach with the Golden Bear wrestling program from 1990-2000.

Fisher, a two-time KU Coach of the Year (2014, 2015), led his 2014-15 team to the most successful postseason during his 15-year tenure as head coach. Kutztown finished fourth at the PSAC Championships, the best finish in school history, boasted a program-record eight regional medalists and finished third at the Super Region I Championships, tying the best finish under Fisher. KU had four national qualifiers that tied for 14th place in St. Louis at the NCAA National Championship, the best finish in program history. KU crowned two All-Americans for the fourth time in KU history, and a two-time national champion.

Ziad Haddad was Fisher's most decorated wrestler. He was a two-time national champion, a three-time All-American and qualified for nationals in each of his three years at KU. Haddad went undefeated and did not allow a takedown in his final two years, and was ranked the top heavyweight in Division II for the entirety of both seasons. He was Kutztown's first National Wrestler of the Year, won two regional championships and one conference title. Haddad graduated with a record of 82-5, fourth in program history.

Fisher has sent wrestlers to nationals every year at KU, has crowned at least one All-American in 13 of his 17 years, and posted a program-record three All-America wrestlers in 2017. He coached Joe Kemmerer and Ziad Haddad to two national titles apiece, and has had multiple All-Americans four different times.

During the 2013-14 season, Kutztown tied its best-ever ranking in the national poll at seventh in Division II. KU finished fourth at regionals and 17th at nationals, its then-third-best finish at nationals in program history.

KU had four wrestlers compete at the NCAA Championships in 2012-13, including fourth-place finisher and All-American Ziad Haddad at heavyweight. Kutztown picked up its then-best-ever finish at the PSAC Championships, hosted by Kutztown, with a fifth-place finish, the best among Division II programs. On Jan. 26, 2013, KU picked up its highest NWCA national ranking in school history at seventh in Division II.

In the 2010-11 season, KU finished 24th and had three wrestlers compete in the NCAA Championships including one All-America honoree. Kutztown also finished fifth at the Super Region I Championships as Fisher had two wrestlers become regional champions.

Fisher guided the Golden Bears to their best regular season in program history in 2009-10. The Golden Bears set the school record for single season wins with 17, eclipsing the previous high of 15. In the span of a week, Fisher earned his 100th career win and the program crossed the 400-win plateau. The Golden Bears had three wrestlers in the NCAA National Championships, and tied a then-school-best 16th place finish.

Prior to coming to KU, Fisher served as assistant wrestling coach at his alma mater, Hazleton High School, from 1987-90. Fisher was a two-time district wrestling champion at Hazleton and a three-time northeast regional runner-up. He captured the District 11 championship and went on to win the District 2 championship when Hazleton changed districts. He still holds the record for the most wrestling wins in school history. A two-sport athlete, he was also a member of the 1984 Big 33 Football Team.

Fisher received his bachelor’s degree in special education for the visually impaired from Kutztown in 1995. He went on to serve as a teacher of the blind/visually impaired at the Capital Area Intermediate Unit, in Summerdale, Pa., from 1996-99.