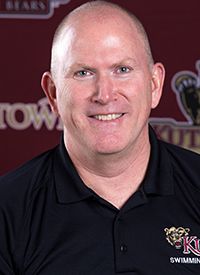 Tim Flannery enters his 22nd season as the head swimming coach at Kutztown University in 2017-18.

Over his career at Kutztown, Flannery’s swimmers have set 158 school records. He has coached 20 NCAA Division II qualifers who have earned 27 All-America and 26 All-America honorable mention honors, and two individual NCAA titles. His swimmers have also earned 13 PSAC individual and relay titles, while 39 of them were named to the All-PSAC team. The women’s swimming team has been honored by the College Swimming Coaches Association as a Scholar All-America Team from 1999-2013, and again in 2016 and 2017. Also, 56 swimmers have been named PSAC Scholar-Athletes under Flannery.

In the 2011-12 season, Flannery’s Golden Bears posted a 5-3 dual meet record. KU finished ninth at the PSAC Championships, where one swimmer was named to the All-PSAC team. Flannery had one swimmer advance to the NCAA Championship where she finished 17th.

In 2010-11, Flannery led the Golden Bears to a 9-1 dual meet record. KU extended its dual meet winning streak to 21 and broke three school records. Kutztown finished eighth at the 2011 PSAC Championships, where three swimmers were placed on the All-PSAC team and two advanced to the NCAA Championships, where one received an honorable mention All-America award.

Flannery led the Golden Bears to a program-best 15-1 dual meet record in 2009-10. He was rewarded for his success by being named the PSAC Women's Coach of the Year. The Golden Bears placed fourth at the PSAC Championships, advanced six swimmers to the NCAA National Championships, earned three All-America honors, five All-America honorable mention honors, and placed 16th at the NCAA National Championship meet.

In 2008-09, Flannery's women's team was 11-3 in dual meets, setting a then-program record for wins in a season. The Golden Bears placed seventh at the PSAC Championships, advanced one swimmer to the National Championships, earned one All-America honor and placed 21st at the NCAA Division II championship meet.

Prior to KU, Flannery was head coach at the U.S. Merchant Marine Academy from 1993-96. During his tenure, his teams amassed a 40-28 overall record. He guided the men’s squad to second-place finishes at the Metropolitan Conference Championships in 1995 and 1996. The women’s team finished fourth in 1995 and third in 1996. He was named the 1996 Metropolitan Swim Conference Men’s Coach of the Year.

Flannery was the assistant men’s coach at the U.S. Naval Academy from 1989-1993. He coached the stroke group to six academy records and was the recruiting coordinator. He also served as a commissioned officer in the Naval Reserve, achieving the rank of Lieutenant.

In addition, Flannery was the assistant men’s coach at Springfield College from 1987-89 and head coach at the Manchester (NH) Swim Club in 1986-87.